It’s been a difficult past 12 months for tech growth stocks. While many of benefited over the two years from pandemic-related dynamics, that tailwind has drastically slowed down, causing investors to reassess their positions in such companies. The results of that reassessment haven’t been pretty.

But here’s the good news. Many quality stocks are now trading for a discount, and savvy investors can scoop them up now for a discount if they’re willing to wait patiently for a full recovery. Two excellent candidates to consider for such a strategy are Meta Platforms (FB 0.73%) and Pinterest (PINS -4.08%). Here’s the rundown. 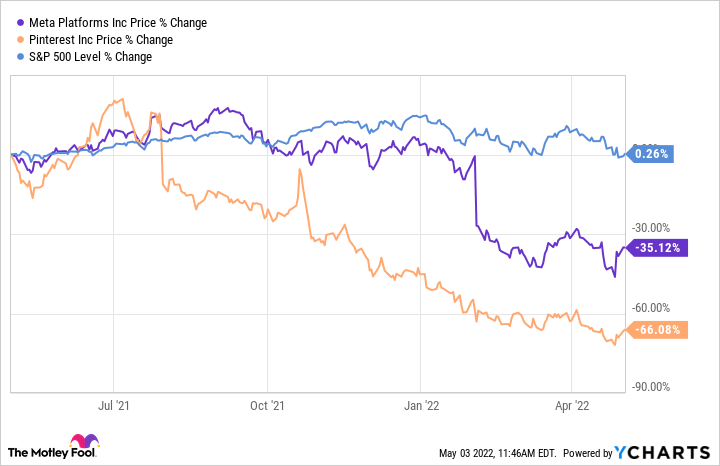 Facebook parent company Meta Platforms makes the bulk of its revenue through the ads businesses run on its platforms, including Messenger, WhatsApp, and Instagram. Recent changes to Apple‘s mobile operating system hurt Meta Platforms’ ad revenue by giving users more control over the data advertisers can collect from their activities. That, combined with the lackluster user growth it experienced in the fourth quarter sent the company’s shares in the wrong direction.

However, the tech giant’s first-quarter earnings gave renewed hope to some doubters. Importantly, Meta Platforms’ daily active people and monthly active people — coming in at 2.87 billion and 3.64 billion, respectively — both grew by 6% year over year (YOY). The company’s total revenue increased by 7% YOY to $27.9 billion. That’s well below Meta Platforms’ historical top-line growth, but considering the challenges it is facing, investors reacted positively. 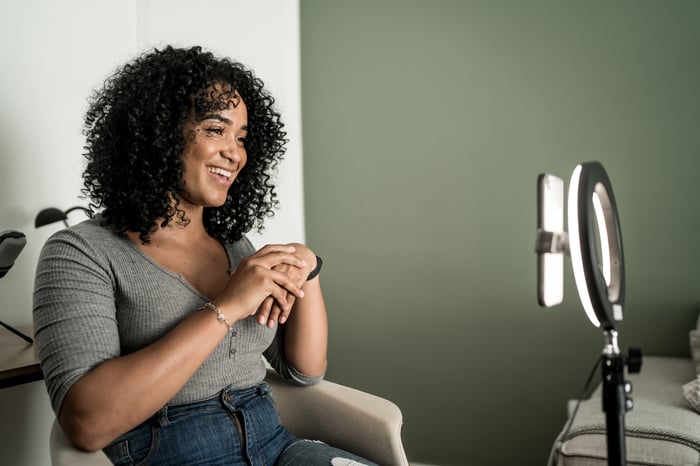 Shares of the company surged on the heels of these updates, but that could be only the beginning for patient investors. Sure, the company is still dealing with privacy-related issues due to Apple’s iOS changes. But Meta Platforms’ ability to continue adding new users — even while nearly half the population of planet earth already visits one of its platforms at least once a month — is an excellent sign that businesses will continue pouring advertising dollars into its websites and apps.

For what it’s worth, the company has been working to adapt to Apple’s iOS changes. This initiative may take some time, but online advertising is still a growing industry. With a network of users that is second to none in the social media space, expect Meta Platforms to continue benefiting from this trend.

Of course, the company does have other opportunities, such as those tied to its metaverse ambitions. While the metaverse could take nearly a  decade to come to life, it is an opportunity that, according to some estimates, could be worth $1 trillion in annual revenue.

Patient investors who get in on Meta Platforms’ shares today while they are still down will reap the benefits down the road.

Pinterest’s user base declined drastically last year, after peaking at 478 million in the first quarter of 2021. That is a problem for the social media platform since, like Meta Platforms, it also makes money from the ads businesses run on its website. A declining userbase means that prospective advertisers have more incentive to take their money elsewhere. But, it is essential to put Pinterest’s user growth trends into perspective.

The company’s number of “pinners,” or users, increased dramatically during the worst of the pandemic when people were stuck at home. Once the economy reopened and people could step outside again, user growth declined. In its recent first quarter earnings, Pinterest recorded 433 million monthly active users (MAUs) in the first quarter, a 9% YOY decrease. But that bad news was accompanied with a promising development: Pinterest had gained two million pinners since the fourth quarter of last year. This marks the first time in a while that Pinterest MAUs had managed to grow sequentially.

The company also reported revenue of $574.9 million during the quarter, 18% higher than the year-ago period. How is Pinterest managing to increase its revenue despite its declining YOY user base? The tech giant’s average revenue per user (APRU) keeps rising. In the first quarter, this metric clocked in at $1.33, 28% more than the prior-year quarter.

Pinterest isn’t out of the woods, but in my view, the sell-off it has experienced in the past year is way overdone. It’s important to look past how COVID-related dynamics affect the company’s overall performance.

While challenges remain — including macroeconomic headwinds and rising geopolitical tensions — I believe Pinterest’s revenue growth will start moving in the right direction again and eventually stabilize. One of Pinterest’s key differentiators among social media platforms is precisely that it allows its users to escape contentious political and social issues and instead turn to creativity.

With surging ARPU and plenty of potential new pinners, Pinterest remains an excellent tech stock to buy and hold for the long run.