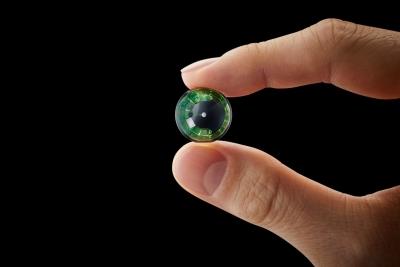 According to the company, the experience will allow users to access timely information quickly and discreetly without forcing them to look down at a screen or lose focus on the people and the world around them.

‘We’re trying to change our relationship with devices and break down these barriers to fundamental personal connections. Mojo Lens lets you be more like yourself wherever your day takes you – we want the technology and the user experience to be something that doesn’t distract from who you are,’ CTO and co-founder Mike Wiemer said in a company blog post.

The San Francisco-based company, which launched in 2015, is also about to launch comprehensive testing of its lenses on humans. It noted collaboration with some sports and fitness brands, like Adidas Running and 18Birdies for user performance in athletes and sports enthusiasts.

‘The goal is to deliver training data and real-time stats in an eyes-up, hands-free way to improve focus and flow,’ Wiemer said.

But Mojo Lens can give athletes a competitive edge, allowing them to stay focused during their workout or training activity and to maximise their performance without looking down at a device.

‘Imagine… you’re a musician with your lyrics, or your chords, in front of your eyes. Or you’re an athlete and you have your biometrics and your distance and other information that you need,’ Steve Sinclair, from Mojo, was quoted as saying to BBC.

The product’s scleral lens – a larger lens that extends to the whites of the eye – corrects the user’s vision, but also incorporates a tiny microLED display, smart sensors and solid-state batteries.

‘We’ve built what we call a feature-complete prototype that actually works and can be worn – we’re soon going to be testing that [out] internally,’ Sinclair said.

However, there are a number of hurdles, including charging of power. Mojo is still testing its product, but wants customers to be able to wear its lenses all day, without having to recharge them.

‘The expectation (is) that you are not consuming information from the lens constantly but in short moments throughout the day. Actual battery life will depend on how and how often it is used, just like your smartphone or smartwatch today,’ a company spokesperson was quoted as saying.

There are also concerns over privacy, similar to Google’s launch of smart glasses in 2014, which was widely seen as a failure. But, Mojo says all data is security-protected and kept private, the report said.


Legal Disclaimer: MENAFN provides the information “as is” without warranty of any kind. We do not accept any responsibility or liability for the accuracy, content, images, videos, licenses, completeness, legality, or reliability of the information contained in this article. If you have any complaints or copyright issues related to this article, kindly contact the provider above.